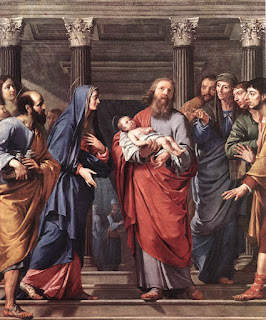 The Glories of Mary by St. Alphonsus Liguori in Radio Cristiandad. (If you do not speak Spanish this Twitter account ussually posts excerpts from the book)

The Gospel of today

Posted by poni albinegro at 11:32 No comments:

More Theological Mythology at the One Peter 5 (Five to One) Website; and its refutation.

According to novus ordo historian, the hellish apostasy and heresy on this day are just Child´s play

Cancer in the Mystical Body of Christ? According to Francis, the Church needs Chemotherapy. (And according to the lefevrist, too)

Sing a gay Church: Francis and the sodomite tax.

Woman are NOT Divine, Slappa-"Papa"!

What are we BOUND to BELIEVE?

An Analysis on Schizophrenic "Neurotheology"

Posted by poni albinegro at 19:47 No comments:

Step softly, under snow or rain,
To find the place where men can pray;
The way is all so very plain
That we may lose the way.

Oh, we have learnt to peer and pore
On tortured puzzles from our youth,
We know all labyrinthine lore,
We are the three wise men of yore,

And we know all things but the truth.
We have gone round and round the hill
And lost the wood among the trees,
And learnt long names for every ill,

And served the mad gods, naming still
The furies the Eumenides.
The gods of violence took the veil
Of vision and philosophy,

The Serpent that brought all men bale,
He bites his own accursed tail,
And calls himself Eternity.
Go humbly…it has hailed and snowed…

With voices low and lanterns lit;
So very simple is the road,
That we may stray from it.
The world grows terrible and white,

And blinding white the breaking day;
We walk bewildered in the light,
For something is too large for sight,
And something much too plain to say.

Is playing with a little hay.
The house from which the heavens are fed,
The old strange house that is our own,
Where trick of words are never said,

And Mercy is as plain as bread,
And Honour is as hard as stone.
Go humbly, humble are the skies,
And low and large and fierce the Star;

So very near the Manger lies
That we may travel far.
Hark! Laughter like a lion wakes
To roar to the resounding plain.

And the whole heaven shouts and shakes,
For God Himself is born again,
And we are little children walking
Through the snow and rain.

The Gospel of Today

Haydock´s commentaries on the Gospel in Daily Catholic
Posted by poni albinegro at 11:58 No comments:

Help Fr Jaqmin; He is Facing One Year of Prison for Destroying a Blasphemous Image

The image of a crucified cow was placed on a Church.

Fr. Jaqmin (sedevacantist) destroyed the image with the company of other persons.

If you want to help him, he has a GoFundMe  were you can donate money. Media like Life Site News and Citizen Go, which always try to help people in this situations, are not present there.
Posted by poni albinegro at 19:27 No comments:

The Circumcision of Jesus

Meditations by Juan Esteban Grosez in Cristo Vuelve
Posted by poni albinegro at 12:44 No comments:

I wish you a happy and Holy 2020. This is the New Year´s Eve Indulgence, and this is a New Year Holy Hour.

The horrors of the "Don´t worry be happy" theology

Mad this way: A post on one of the most demonic arguments to promote the "rights" of sodomy

Unitarians believe there is no objective truth. This post will tell you how to convert them effectively.

But, what is an Ecumenical Council? - (Hint: No mark of shiva, macumba or Pachamama Christmas required)

What is going on with hypnosis? A sedevacantist website explores what is the teaching of the Church and what are the dangers of modern mesmerizing.

Tradcast 026 and the false opposition to Bergoglio. "There can be nothing more dangerous than those heretics who admit nearly the whole cycle of doctrine, and yet by one word, as with a drop of poison, infect the real and and simple faith taught by Our lord and handed down by Apostolic tradition." Pope Leo XIII, Satis Cogitum.

A Bishop of the dictator "pope" imposes the harsh laws of dialogue to two conservative hermits. But don´t believe that those trads are innocent victims...

Is Mary our Co- Redemptrix? Novus Ordo Watch examines this doctrine while it defends the Most Holy Virgin Mary.

Pope Gregory XVI  condemns the doctrinal innovations that the modernists seek for the Church
Posted by poni albinegro at 17:13 No comments:

Are you out of Netflix?

Then Jesus said to his disciples: If any man will come after me, let him deny himself, and take up his cross, and follow me. For he that will save his life, shall lose it: and he that shall lose his life for my sake, shall find it. what doth it profit a man, if he gain the whole world, and suffer the loss of his own soul? Or what exchange shall a man give for his soul? (Matthew XVI 24-27)

Netflix released a movie in which Jesus Christ is shown as a sodomite and more blasphemies. It is called "The last hangover"

In the future, they will release a science ficction programe based on The Messiah.

Netflix also missed fans when they decided to boycott the state of Georgia, who was going to forbid abortion.

It is believed that the series "13 Reasons Why" in participated on the increase of suicide rates. Although it is argued that many depressed youths contacted help due to the show, and the producers made a website with help resources, many psychologists say that depressed teenagers who watch the show may experience suicidal toughts.

I read an article by the sedevacantist writer Griff Ruby in which he explained that it is impossible to help others to save their souls if we don´t make an effort to preserve Grace. ¿How can we criticize homosexuality, obscenity and blasphemy if we patronize a TV platform that glorifies them? We are guilty of the crimes we help with out money.

Get out of Netfilx, and if you want to do something else, this links are petitions online to take the series away.

"What a shame in front of a God crucified and crowned with thorns, and i, who want to follow His steps, show cowardice in front of sufferings" - St. Bernard

"And everyone must reflect calmly how disgraceful it is to please the enemy of humankind, and displease Christ" - St. Robert Bellarmine

"All the evil of the world is due to lukewarm Catholics"
- Pope St. Pius X

"If people did for God what they do for the world, ¡How many more Christians would go to Heaven!" - St. John Vianney
Posted by poni albinegro at 12:58 No comments:

Archive of the blog